Arnel Campaner Pineda (born September 5, 1967) is a Filipino singer and songwriter. He came to prominence in the Philippines during the 1980s and internationally in 2007 as the lead singer of the American rock band Journey.

In 1982, when Pineda was 15 years old, he became the lead singer of the Filipino group Ijos. He used to sing in a Shakey’s Pizza Parlor on Taft Street in Manila. In 1986, some members of Ijos formed a group called Amo. Amo entered and won the Rock Wars contest in the Philippines.

In 1988, Amo entered and won the Philippines leg of the Yamaha World Band Explosion. They went on to the finals in Hong Kong, but were not qualified to win due to a technicality. The rules stated the winning song had to be an original composition. However, they also stated that the song entry in the finals had to be the same song with which the band won their country’s leg of the competition. Amo’s winning song in the Philippines was Queen’s “Bohemian Rhapsody”. After the contest, the band continued as Amo, performing live. They opened for Robert Palmer in Manila in 1989. Amo played in clubs in Quezon City, Olongapo City and Makati City, which are located in Luzon, the biggest island in the Philippines. Amo was very popular in the Chinese-owned California Jam club in Olongapo City, which was frequented by United States military personnel.

In 1990, Pineda and other members of Amo formed another band called Intensity Five and once again entered the Yamaha World Band Explosion. Pineda won the Best Vocalist award and the band came in as first runner up.

Later in 1990, five of Amo’s original members split from the band leader, Ulysis Ablang and formed another band behind Pineda, New Age. This occurred prior to the release of Amo’s only album released in 1990 titled Ang Tunay na Amo (“The Real Master”) on BMG records which spawned one popular radio hit called “Running Away”. (The song gained recognition in 2006 by another Filipino artist Erik Santos, who won a Filipino TV talent show, Star In A Million.) The remaining members of Amo went on to become The Boss Band, while Pineda’s band, New Age, played regularly at Fire and Rain in Makati City.

In 1991, during one of those performances, a talent agent spotted Pineda and New Age and asked them to move to Hong Kong to perform at a very popular entertainment restaurant called Grammy’s. With New Age, Pineda performed six nights a week, Tuesday through to Sunday, for several years thereafter. After a long-term serious relationship failed in 1994, Pineda suffered health problems, which almost destroyed his voice. He then returned to the Philippines. After six months of recuperation, he was able to sing again. He returned to Hong Kong and resumed singing with his band. In 1998, the owner of Igor’s, a horror-themed restaurant/nightclub in Hong Kong, asked New Age to perform there. Dressed in skeleton outfits, they called themselves The Rolling Bones.

In 1999, Pineda caught the attention of Warner Bros. record label and flew back to the Philippines on his days off to record a solo album, the self-titled Arnel Pineda. Most of the album’s ten original songs were slow ballads, with only two upbeat numbers, one of which carries a Latin style. One of the songs, “Iiyak Ka Rin” (“You Will Cry Too”) became a karaoke favorite in Asia, while another song “Sayang” (“Too Bad”) became a radio favorite. Pineda wrote and arranged several songs. He continued to perform with New Age while making his album and for several years thereafter. In 2001, Pineda sang one song, “Looking Glass”, with Filipino band South Border on their album The Way We Do. Earlier that year, Pineda formed a new band, eventually called 9mm, and played around the city’s top bars including The Hard Rock Cafe in Makati City. The band played a three-month stint at The Edge in Lan Kwai Fong, Hong Kong, in 2002.

In 2004, three members of New Age reformed with a female singer sharing lead vocals with Pineda and called themselves Most [email protected] This band played 3–4 hour sets Monday through Saturday at The Cavern Club in Hong Kong.[8] On their only day off, Sunday, the band often performed at Filipino community events.

In 2005, Pineda recorded the theme song of the short-lived Filipino radio show Dayo. A band named The Visitors was briefly formed for promotion purposes of the Dayo soundtrack consisting of three members from Ijos/Yjoz, Amo, New Age and Most [email protected] 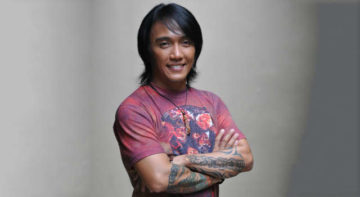